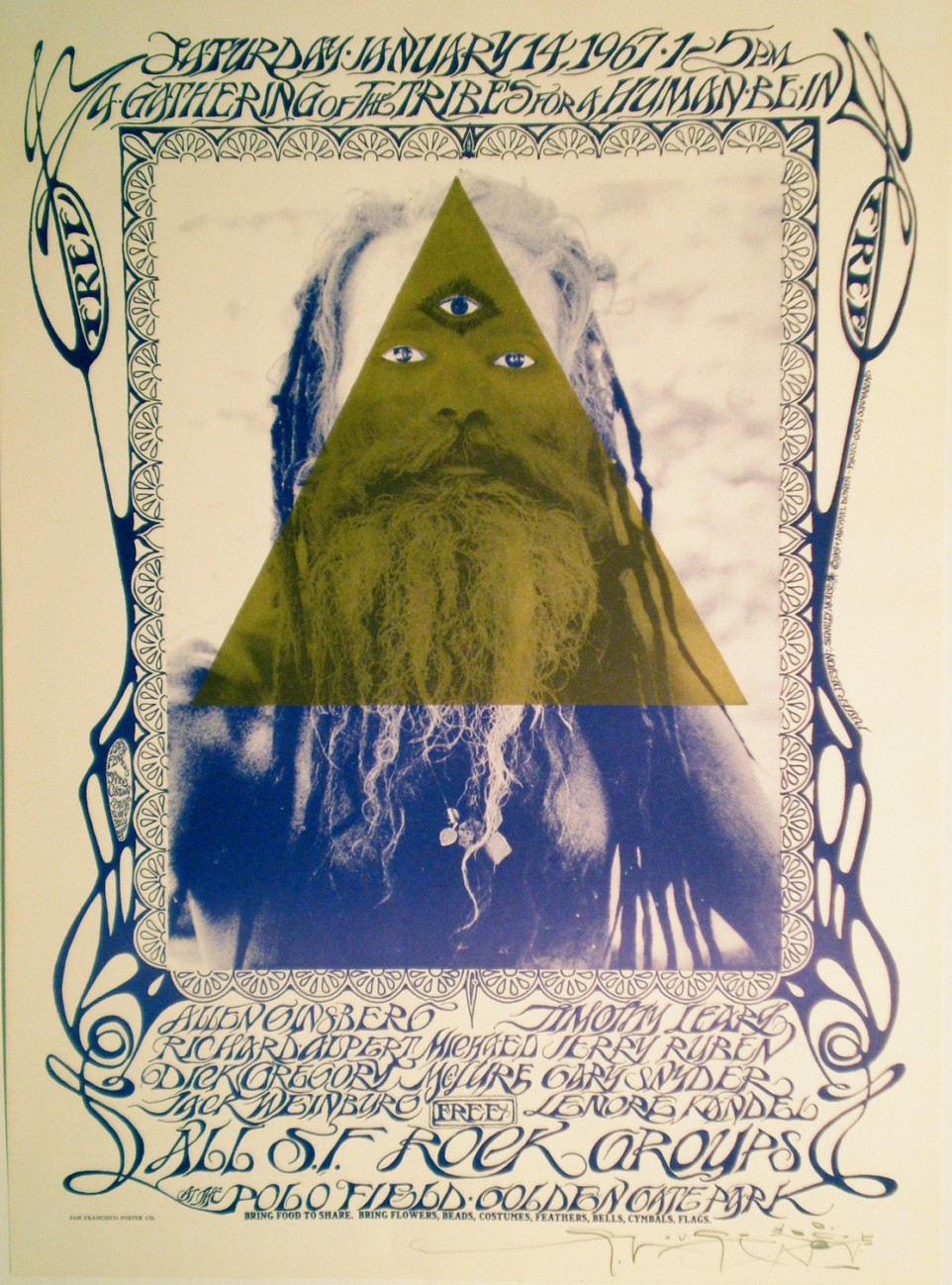 Turn On, Tune In, Drop Out.

‘How is violence to be eradicated, without begetting more violence?
What method to stop war, without further killing?
Nothing short of a basic shift in the human psyche – there appears to be no more readily discernable answer.
The idea of change being effected by a mass change in the collective consciousness and conscience of mankind
is not so much wishful thinking, but is the Path we must travel.
The whole needs to see itself for what it is – ONE.’ –Michael Bowen (December 8, 1937 – March 7, 2009)

Announced on the cover of the first edition of the counter-culture zine San Francisco Oracle, the “Gathering of the Tribes” or “Human Be-In” as it came to be known, was the prototype of all 1960s counter culture celebrations. It was this event that precipitated the legendary Summer of Love, and made San Francisco’s Haight-Ashbury the epicenter of the burgeoning hippie movement. The Be-In featured all the luminaries of psychedelic counter-culture, including Timothy Leary, Allen Ginsberg, Gary Snyder, Richard Alpert (Ram Dass), Dick Gregory, Lenore Kandel, and Jerry Ruben. Many of the Haight’s best musical acts also performed, including the Grateful Dead and Quicksilver Messenger Service. It was at this gathering that Timothy Leary coined his famous phrase, “Tune in, Turn on, Drop Out”. LSD was provided en mass by the legendary chemist Stanley “Bear” Owsley, who was also the sound operator for the Grateful Dead and is the namesake behind the famous Grateful Dead dancing bears. 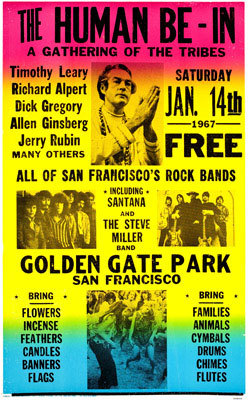 The Diggers provided free food to the crowds, which were estimated in excess of 30,000. It was this huge number of spontaneously gathered celebrants that attracted national media attention to the psychedelic Haight-Ashbury community, and made everyone involved realize that a profound new movement in American culture was being born. The ethos of this new movement was a fundamental questioning of authority, a focus on individuality, decentralization, ecological awareness, and consciousness expansion through cultural openness and the use of psychedelic drugs. These ideas transfixed mainstream culture, and the phenomenon of the “hippie” burst full force into the public consciousness, transforming a generation. –Source: Magic Bus.com

“The Human Be-In took its name from a chance remark by the artist Michael Bowen made at the Love Pageant Rally. The playful name combined humanist values with the scores of sit-ins that had been reforming college and university practices and eroding the vestiges of entrenched segregation, starting with the lunch counter sit-ins of 1960 in Greensboro, North Carolina, and Nashville, Tennessee. The first major teach-in had been organized by Students for a Democratic Society at the University of Michigan, 24–25 March 1965.” –Source: Wikipedia

“The psychedelic baby eats the cybernetic monster!” It was a battle cry of the ’67 Be-In, Michael Bowen tells me. We’re sitting in the office at Be-In 9 central, some dozen notebook computers, Macs, scanners and a few miles of cables in the room behind us. It was different in 1967 when Beat artist Bowen organized the Human Be-In along with friends Allen Cohen and Tim Leary. “Personally I never felt anti cyber culture, but there was a feeling that it had to be controlled… that we could all become robots. Also, there were computer-driven experiments on animals that we were concerned about. The Be-In was the culmination of ten years of psychedelic revolutionary preparation, with the emphasis on personal freedom.”

Freedom is the link. As cyber culture explodes, we need to resist corporations and the government, says Bowen. Other than that, he says, “there’s a lot of 60s bullshit that has to be removed. The whole hippie commune idea was destined to fail. A good commune is what’s happening today on the ‘net. It’s not a question of how many people can use one bathroom.” 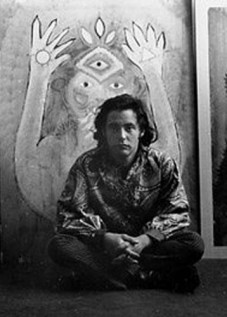 And then there’s drugs. “Drugs are not a good weapon any more in the fight,” says Bowen – other than marijuana. He gets passionate about the craziness of suppressing cannabis when tobacco is freely available and obviously poisonous. His most recent artwork is “Marlboro Nazi”, which includes a frame made of collectors’ card images of Hitler from 1930s German cigarette packs. “Six million and one hundred million more” reads the message under Marlboro dude’s silhouette.

“This is a nice party,” says Bowen (though he asks me several times where the food is – I wish I knew). He adds though that it’s a small thing when compared with shakings in the computer industry at large. “Understand what personal freedom is and stay free.” The psychedelic baby might be an adult now, but it’s still got its work cut out.

[Note: Artist Michael Bowen who organized the Human Be-In was a founding [design] editor of the San Francisco Oracle, a founder of the Visionary Arts movement and married at the time of the Be-In to Martine Algire from the DAW. Martine would also inject her ideas into the Be-In and the famous “Exorcism at the Pentagon” they also helped organize. Bowen created the poster for the Be-In with Stanley Mouse (another early member of the DAW), who did the calligraphic lettering.] 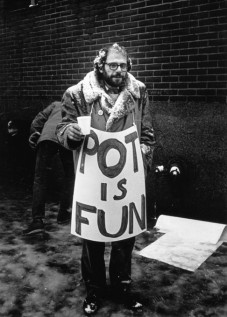 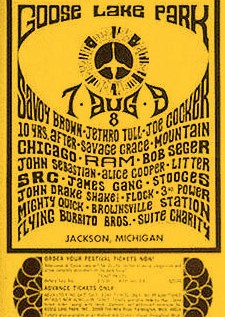 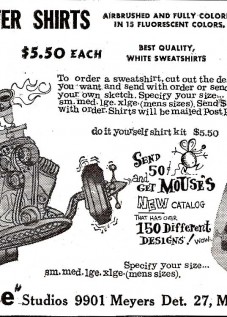 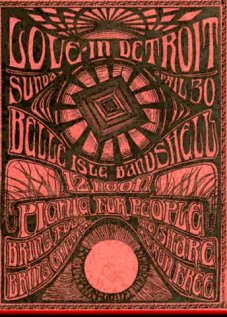