Wayne Kramer’s autobiography The Hard Stuff: Dope, Crime, the MC5 & My Life of Impossibilities, is a courageous journey into one man’s ‘heart-of-darkness’ –a road pitted with wrong turns, bad relationships, drug abuse and crap decisions that eventually lead to a prison cell and finally tiny specks of light shining at the end of a long dark tunnel. Kramer opens his life up in bold ways, beginning with some horrible family abuse in childhood. Kramer is a natural writer providing colorful details told with sincerity and humor.

The Hard Stuff is told as a chronology, with the MC5 as a returning refrain. The MC5’s presence in Kramer’s memoir is never fading. Picturesque details are profuse; on recording each MC5 album, or tripping on LSD with Dennis Thompson at Timothy Leary’s home in the hills of San Francisco, or the violent political shit-storm confrontation with the Motherfuckers and MC5 at the Fillmore; the death of his comrades and their reunion as the DKT/MC5. The stories fly by rapid fire, hilarious and totally insane.

Dickensian storm clouds appear often, and as Kramer slips into a seedy lifestyle as a drug addict and petty criminal, we see him swirling the drain. He finally lands into the historic Lexington prison, with old chord changes scrawled on the prison walls. There he meets Red Rodney an old-time Jazz pro and drug addict who mentors Kramer into a more serious relationship with his instrument. Another interesting character is Nate Cohen, a fat Jewish gangster who takes over Kramer’s “no-work gig” on the quarterly prison paper— turning it into a weekly publication, teaching Kramer valuable lessons about work ethics and con artistry.

Prison life does little to rehabilitate Kramer, and after his freedom he backslides with more self-abuse while trying to get on his feet. Kramer is a cat with nine-lives, and he uses them quickly. His collaboration with Johnny Thunders in Gang War was short lived, mired with heroin addiction, a crazy Lansing club rip-off gone wrong, and Thunders finally wanting sole billing.

Along the way Kramer gives props to family, friends and councilors who listened, and gave back positive guidance. Recognizing good help when needed was Kramer’s best insight. Poet manager of the MC5, John Sinclair is a wise stabilizing force, and although their initial falling out was tragic to them both, over the years their friendship remains tight. Musician-educator Charles Moore was another steady light and mentor, who collaborated with Kramer on Lexington, their successful Jazz album, that came out just before Moore’s death in 2014.

Underground journalist, provocateur and lead singer of the Deviant’s Mick Farren was another creative friend and co-conspirator. While residing in New York City in the ’80s they wrote songs together for a bizarre Off-Broadway musical based on William S. Burrough’s totally bonkers book The Last Words of Dutch Schultz. I hope it gets a revival soon.

The Hard Stuff is littered with surprising surreal-but-true stories and makes an engrossing page-turner. Kramer’s at his best when he penetrates the meaning of his actions with quick insight and self-analysis. “I was the architect of my own ruin,” he confesses.

The real hard stuff happens when Kramer turns his life around, finding help, and regaining control, finally realizing a sense of kindness, and the joy of helping others. “One of the ways I grow and heal is by being of service to my fellow man,” writes Kramer. His non-profit work with Jail Guitar Doors merged with his love of music, and remains one of his proudest accomplishments.

Kramer’s statement on the meaning of success is profound and something we all could learn from: “I am content to remain a student,” he states. It may be a coincidence that the book’s release coincides with the upcoming MC50th tour, but regardless, its a redemptive story MC5 fans should know about and appreciate. This being the 50th anniversary of the seminal album Kick Out the Jams, makes reading The Hard Stuff another reason to celebrate.

The end of The Hard Stuff feels more like a new beginning, with all things possible. A child and fatherhood enters Kramer’s life, bookending his own childhood in the beginning, completing a circle with another chance to make a better world.

Wayne Kramer will appear at the FREE! Motor City Muscle Festival at the Underground Stage at Hart Plaza in downtown Detroit on Saturday, Aug 18, at 6:15 PM –appearing with Kramer will be musician/producer Don Was, a longtime friend of Kramer’s who will perform and discuss the book together. Book Beat will supply books for the event, and a signing will follow the presentation. 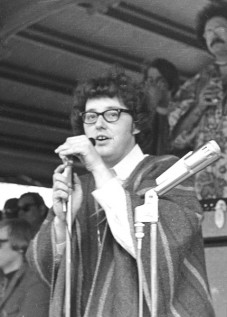