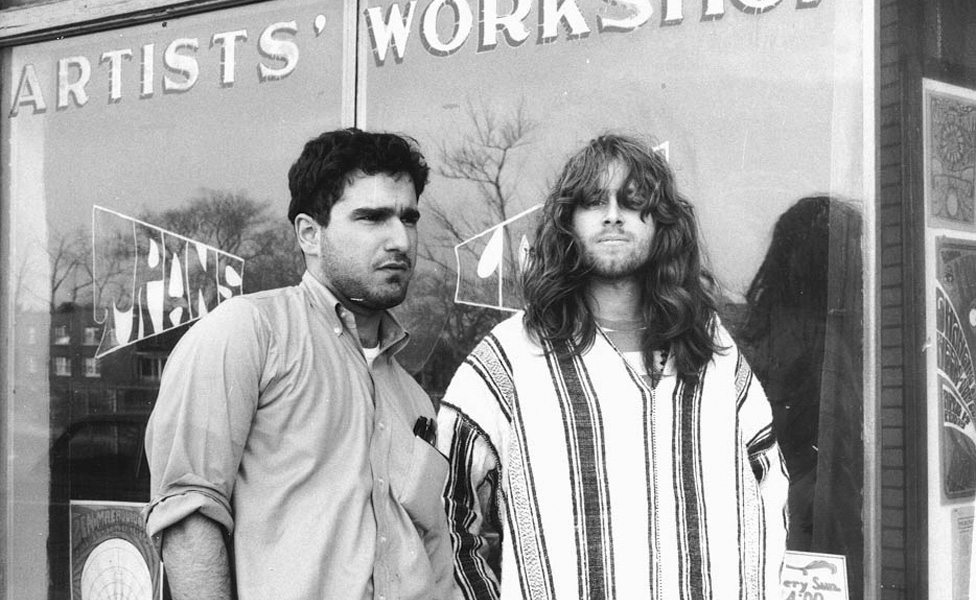 Harvey Ovshinsky (left) and Jerry Younkins in front of the DAW, 1966

Fifth Estate was started by Harvey Ovshinsky, a seventeen-year-old youth from Detroit. He was inspired by a 1965 summer trip to California where he worked on the Los Angeles Free Press, the first underground paper in the US; Harvey’s father, inventor Stan Ovshinsky, knew the editor of the Free Press, Art Kunkin, from their years as comrades in the Socialist Party.[1] The name “Fifth Estate” was inspired by The Fifth Estate coffee house on the Sunset Strip, where the Free Press had its office in the basement.

The first issue was published on November 19, 1965—”That’s what we really are—the voice of the liberal element in Detroit,” it said. It was produced on a typewriter and then reproduced by offset lithograph, in an 8-page tabloid newspaper format with two pages left blank. It featured a critical review of a Bob Dylan concert, a borrowed Jules Feiffer cartoon, alternative events listing and an announcement of a forthcoming anti-Vietnam War march. None of these things would have been included in contemporary newspapers.

In 1966 Ovshinsky moved the office from his parents’ basement to a Cass Corridor storefront near Wayne State University. Here the paper was saved from extinction by the Detroit Committee to End the War in Vietnam, John Sinclair’s Artist Workshop, and other radicals, with Sinclair signing on as the paper’s first music editor. Later in 1966 the paper moved to Plum Street where they also established a bookshop. Fifth Estate thrived in the late sixties, a period when over 500 underground papers emerged in the US. Thousands of copies were distributed locally with hundreds more being sent to GIs in Vietnam. Fifth Estate openly called on soldiers to mutiny. In 1967 the Fifth Estate offices were tear-gassed by the National Guard during the 12th Street riot. In this period the print run reached 15,000 – 20,000 copies, publishing biweekly in a tabloid newspaper format of 20 to 32 pages, with local ads and listings.

The spirit of the paper during the first ten years of its existence was summed up in a Feb. 1, 1969 staff editorial: 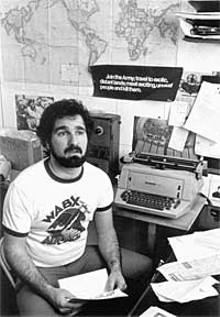 Harvey Ovshinsky’s storytelling mantra is simple — as mantras must be. “Don’t stop,” it says. “Go further.”

An internationally acclaimed media fixture in Detroit for more than 30 years, Harvey O. has created and told thousands of stories throughout his expansive career. From his early days of radio to later years of television and now documentary film and video, Ovshinsky’s career is a colorful and fantastic voyage, at times brave and visionary.

Founding a famous underground radical newspaper at age 17 (The Fifth Estate, still being published, but without him), then blazing a trail for free-form radio on Detroit’s storied indie station, WABX, Ovshinsky established his liberal and tenacious personality in Detroit from the beginning.

Perhaps a bit mellowed over the years, he nonetheless still has those defining qualities. Whether now it’s a corporate video about the need for small-market insurance reform or a compelling full-length doc on a family living with AIDS, Ovshinsky’s skills and craftsmanship haven’t dulled.

That’s why Detroit Docs International Film Festival is awarding him its inaugural Career Achievement Award. “Harvey is committed to this city and this state; he is truly Michigan-based,” festival director Tod Hardin says. “His name might not be household, but he’s been doing this a lot longer than Michael Moore. We feel that he truly epitomizes the Michigan documentary filmmaking scene.”

While Ovshinsky has received many and varied awards for his work, this honor represents something special. “I am in awe of what Detroit Docs is doing,” he says. “An international documentary film festival in Detroit? I would have said not possible. But what [founder] Chris Walny and the rest of the volunteers are doing is very brave, very visionary.

“It’s one of the reasons I don’t lose hope for this city. Getting this award reminds me that I’m not crazy. There are others in this city who believe like I do in the profound importance of storytelling.”

So what keeps him in Detroit? The obvious move for a man of Ovshinsky’s professional stature would be to move to a coast, get a speakerphone in his car and start calling everyone “babe.” But his motive, like the city’s ethos, isn’t obvious. “Detroit is the Saudi Arabia of content,” he says. “This city is full of drama, and that’s what I need as a storyteller. Why didn’t I head to L.A.? Because I’m smart, that’s why.”

Yet he’s no Pollyanna about his home — and his commitment to it. “Detroit is tough and hard, and it doesn’t give a shit. It really tests your power of projection, literally and figuratively. There’s nothing superficial about this city, and you have to dig much harder to scratch the surface.”

Hollywood is a business, that’s a fact. There’s not much room for creativity and voice once those mammon-soiled hands get around a screenplay/idea/film/song. Ovshinsky could have gone out there to become one of countless people who don’t get their phone calls returned, but he chose to stay in the D, continuing to hone his voice and teaching others to do the same. He teaches writing workshops for teachers and students, as well as storytelling workshops for corporations that want to maximize the impact of their in-house video productions.

“It’s not about Detroit stories,” he says of the work. “It’s about Detroiters’ stories. There’s a lot of light in this city of darkness, but you have to kindle it, blow on it — and then you have to share it with others. I live my life personally and professionally as a storyteller by asking two questions: ‘Got a light? Need a light?’

“It’s all about sharing the inspiration. I don’t know why Detroit Docs is giving me this award, but that’s why I’m taking it.”

A retrospective of some of Ovshinsky’s films will be shown at the festival this year when it runs Nov. 11-14. He’s also offered to host a workshop after his retrospective on Sunday, Nov. 14. “I’m going to tell everyone that comes to the workshop to keep looking and don’t give up,” he says. “We have to play with the cards we’re dealt, and we’re holding Detroit cards, so toughen up.

“The enemy of the writer is the surface, so scratch it. Don’t stop. Go further. And take your ‘write-amins.’”