“The duty of the revolutionary is to make the revolution.” The duty of the musician is to make the music. But there is an equation that must not be missed: MUSIC IS REVOLUTION. Rock and roll music is one of the most vital revolutionary forces in the West-it blows people all the way back to their senses and makes them feel good, like they’re alive again in the middle of this monstrous funeral parlor of western civilization. And that’s what the revolution is all about-we have to establish a situation on this planet where all people can feel good all the time. And we “I not stop until that situation exists.

Rock and roll music is a weapon of cultural revolution. There are not enough musicians around today who are hip to this fact. Too many of your every-day pop stars feel that music is simply a means by which they can make a lot of money or gain a lot of cheap popularity or whatever-dollars and ego power, both of which are just a killer ruse, in fact I would have to say the killer ruse of all time. Money is the biggest trick of all, next to the so-called ego, which comes out of the same scene as money anyway. I mean the ego developed strictly as an economic function, when there got to be too many people on the planet for the planet’s natural resources and there wasn’t enough for everybody any more. Then people had to start separating them- selves out from the tribe and see themselves as individuals, because if there ain’t enough for everybody then everybody’s got to try to make sure he or she has got enough, and there’s always somebody else around who wants to take it away from you….

Think about it. If all the kids in high schools who can’t stand that shit would stop going-all of you-then where would the schools be? They have to have you there. If you aren’t there they won’t be able to eat-they won’t have a job any more. Your parents will go crazy too….

If you’re living at home, start planning for what you’ll be doing when you split. Get together with your people who are waiting to split and plan a scene for when you can be together. Start practicing now, on your parents’ money and time. Save up your money if you get any so you can buy your supplies and equipment when you split.

Don’t waste your time pissing and moaning about how shitty every- thing is. Start getting it together so you can change it. Everybody knows what a drag it is. You’re not telling anybody anything they can use. Exchange information. Get down. And when you have split, get your thing together so you’ll be able to have a better time than just sitting around smoking bogus dope, dropping bogus speed-filled acid, shooting smack, and listening to brainwash low-energy jams. Tripping out is a dead end and a drag. You always come down. If you engage yourself in a total revolutionary program of self-reliance and serving the people any way you can, you will have a guaranteed good time forever (except for when they lock you up from time to time) and will help other people get it together too.

It isn’t enough just to drop out though-you have to create new forms which will enable you to sustain yourselves while you’re doing your work. The commune is the life-form of the future, it is the revolu- tionary organizational life-form, and the communal relationship must be realized in everything you do. Rock and roll is the best example. That’s why I said at the beginning of this rant, that MUSIC IS REVOLUTION-because it is immediate, total, fast-changing and on-going. Rock and roll not only is a weapon of cultural revolution, it is the model of the revolutionary future. At its best the music works to free people on all levels, and a rock and roll band is a working model of the post-revolutionary production unit. The members of a rock and roll family or tribe are totally interdependent and totally committed to the same end-they produce their music collectively, sharing both the responsibility and the benefits of their work equally. They work on the frontiers of modern technology to produce a new form which is strictly contemporary in all its implications. There is no separation. And that’s what it’s all about….

Capitalism is obsolete-it is based on the two horrible notions of private property and competition, both of which have to go right now. And the point is, that it’s time for them to go, because there’s no more room for that old-time shit in the world today. People have got to get it together, not apart. People are now stuck in builshit jobs, bullshit schools, bullshit houses, bullshit marriages, bullshit social and economic scenes, and there’s no need for it anymore. Most of the jobs that presently exist are useless and anti-human, and they’ll be done away with immediately once the people are in power and the machines are freed to do all the work.

Likewise most of the products of the present consumer economy they’re bullshit and will no longer exist. Eighty-seven different brands of toothpaste! Millions of junky automobiles! That’s all they are–junk-that people have been hooked on by the junk pushers of capitalism. The whole thing is ridiculous!

Everything has to be free or else!

It is extremely important for urban groups to organize themselves around some form of popular cultural activity like a rock and roll band, a community newspaper, guerrilla theatre groups, a health clinic, or whatever you can put together. The cultural forms will give you access to the mass media and to mass audiences of pre- revolutionary youth who are just sitting around waiting to get totally turned on. High school groups can organize around newspapers and posters and bands and present a united front in their dealings with administrators and other old creeps…. It’s time to turn on, tune in and take over! Up against the ceiling, motherfucker! 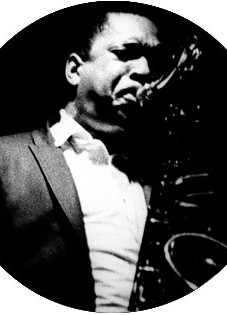 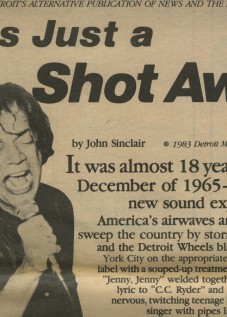 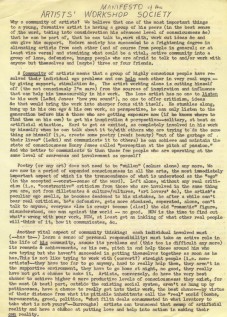 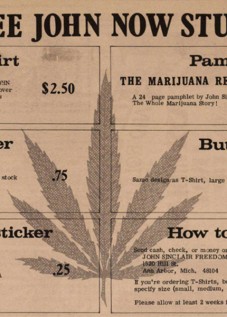