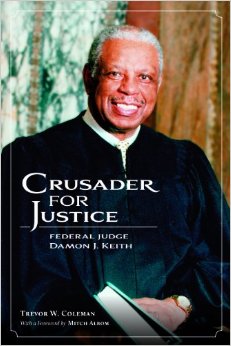 Damon J. Keith was born in Detroit, Michigan, on July 4, 1922. He is a graduate of West Virginia State College (B.A. 1943), Howard University Law School (J.D. 1949) and Wayne State University Law School (LL.M. 1956). In 1967, President Lyndon Johnson appointed Keith to the United States District Court for the Eastern District of Michigan, where he ultimately served as chief judge. He was appointed to the United States Court of Appeals for the Sixth Circuit in 1977. As a member of the federal judiciary, Judge Keith has been a courageous defender of constitutional rights, giving real meaning to the promise of “equal justice under law.” Judge Keith is the recipient of numerous awards, most notably, the NAACP’s highest honor, the Spingarn Medal, and the Edward J. Devitt Distinguished Service to Justice Award, the highest honor that can be bestowed on a member of the federal judiciary. –WSU Press biography

Excerpt from: A People’s History of the CIA Bombing Conspiracy (the Keith Case); Or, How the White Panthers Saved the Movement:

“Everyone knew that this would be a watershed case, particularly with the streams of political dissent (youth, anti-war, civil rights, black liberation, feminist, environmental, LBGT) bursting forth in 1971. The Government, determined to maintain the COINTELPRO program against these movements, as its final submission likened the case to the occasions in U.S. history when federal troops had to be called out to quell domestic disturbances, producing a list. Predictably, they were all racial incidents or labor disputes.

The Keith decision was released on Monday, June 19, 1972, U.S. v U.S. District Court (Keith), 407 US 297 (1972). The Watergate burglary occurred the night of June 16, 1972, the Friday before. Kinoy always theorized that Rehnquist had tipped someone that they were going to lose Keith on Monday. Thus, the “plumbers” were not putting wiretaps into the Democratic National Committee office, they were taking them out. No evidence has ever been adduced to disprove the theory, but none of the “plumbers” ever said so. Regardless, the combination of the decision and Watergate ultimately led to the end of the Nixon presidency and a comprehensive expansion of political rights.

Interestingly, the opinion was written by Lewis Powell, who had given speeches in favor of warrantless wiretapping while he had been President of the ABA. Bill Gossett’s representation of Keith could not have hurt in that regard. It was a unanimous 8-0 decision. But that was not the end of the case.

Quietly, all of the big conspiracy cases, including the Weatherman indictments in Detroit and elsewhere were dropped. The Government could not prove a single case without its illegally obtained evidence or else did not want to suffer further embarrassment and exposure of COINTELPRO, so they abandoned them. That is how the White Panthers and Judge Keith saved the movement from years of surveillance, COINTELPRO disruption and conspiracy charges.

During the pendency of the appeal, I had a conversation with Ralph Guy, still US Attorney. He indicated that if we won, he was afraid that it would just drive the practice further underground and make it more clandestine. How prophetic that was! Guy went on to be appointed to the District Court and then to the Sixth Circuit. He has been one of the judges appointed to sit on the FISA (Foreign Intelligence Surveillance Act) Court, which, after the reforms which came out of the exposure of the COINTELPRO program, was supposed to consider applications for intercepts and searches involving foreign threats to domestic security. We now know that under Bush II, even this extremely friendly bench was not considered to be sufficiently malleable for the Bush/Cheney/Rumsfeld security initiatives, even after the Patriot Act.”

–Source: A People’s History of the CIA Bombing Conspiracy (the Keith Case); Or, How the White Panthers Saved the Movement
By Hugh “Buck” Davis